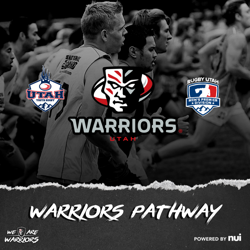 “This is truly a first-of-its-kind cradle to grave pathway,” said Utah Warriors General Manager and CEO, Kimball Kjar, “With the recently launched Junior Warriors program, it’s our goal to provide opportunities for kids, youth, and all levels of players to reach their fullest potential, including the chance at the MLR (Major League Rugby) level.”

Kjar noted the recent launch of the Junior Warriors program, a clinic and experience-based kids club for players and fans aged 5-16 years old. The JR. Warriors will partner with Utah Youth Rugby (UYR), the state’s governing body for youth and high school rugby, to support the growing needs of UYR and to introduce more kids to America’s fastest growing team sport.

With experience as a player at the Super Rugby and other top professional levels Semple is looking forward to partnering with Utah Youth Rugby and building the Warriors Academy.

“I’m really excited and honored to work with Utah Youth Rugby be the first Warriors Academy manager,” Semple said, “To be able to come into an organization and put your own ideas, philosophies and skill sets into a young group of men and watch them grow into professional players is a coach’s dream. This program is a great opportunity for the Warriors to support the development of the best local talent and start ingraining ‘The Warriors Way’ into these players from a young age. The program is not only going to help develop these players rugby ability but also develop them as people physically and mentally.”

The Warriors Academy will be an elite supplementary development team in support of Utah Youth Rugby high school teams and All-Star programs. The Academy is set to launch in February with a player try-out on January 26th at the Zions Bank Real Academy. Spots for the inaugural Warriors Academy group will be limited to 40 players (20 U16 players and 20 U18 players).

“The mission of Utah Youth Rugby is to build character in youth through rugby,” Power said, “Working hand in hand with the Utah Warriors Academy, our youth players will now have more opportunities to grow and develop into select side players. We are excited to see former Utah Youth Rugby All-Stars like Nolan Tuamoheloa, now part of the Warriors team. This partnership is the missing link for our players' future aspirations.”

For more information on the Warriors Academy and for tryout details please visit: www.WarriorsRugby.com/WarriorsAcademy.

“The Warriors Selects program that will provide opportunities for our local players,” Daniels said, “It is also a positive way of rewarding 'stand out' players at both the collegiate and MPD levels. I believe that it is very important that future Warriors teams are built upon local talent and it is our job to identify, develop and provide opportunities for that to happen. All of these new Warriors initiatives, JR. Warriors, Academy and Selects will do that.”

Also announced as part of the Warriors Selects is the return of former Utah Warrior Ben Nicholls, who will head up the Selects program. Nicholls is a former two-time National Champion Club 7s head coach of the Rugby Utah Selects in 2016 and 2017 and Zimbabwean National Team Member.

The Warriors Selects will fill out the remainder of the coaching staff through open applications. All UYR, MPD, and Collegiate coaches interested in working with the Utah Warriors and the Selects coaching staffs and players can submit resumes to WarriorsSelects@WarriorsRugby.com. Application deadline is January 12th.

With limited spots available for Warriors Selects players, Utah Warriors and Selects coaches will work with MPR and Collegiate coaches to build the inaugural roster for the Warriors Selects program. Player nominations can be sent to WarriorsSelects@WarriorsRugby.com and are due by January 22nd.

"This partnership with the Utah Warriors is a huge opportunity for the MPD teams and players to grow and develop the game locally,” said MPD Manager Efiafi Fekitoa, “It will provide a clear pathway for our local talent and will help them continue to compete in an elite program with the potential to play professional rugby. Our goal is to grow the game here in Utah and to help young athletes excel to another level and in life. We are looking forward to working with Utah Warriors and Selects coaching staffs."